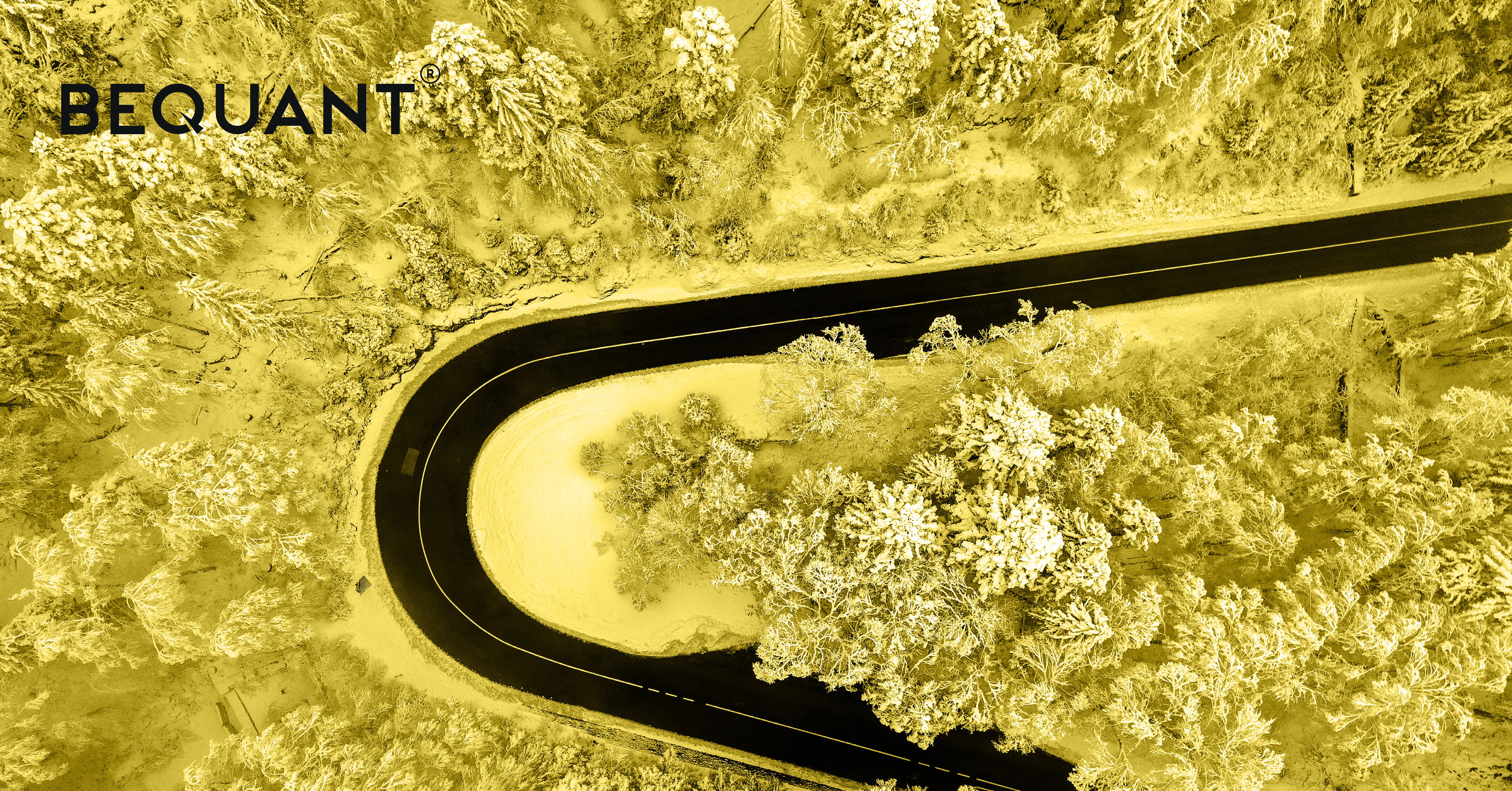 U-turns can be painful, protracted affairs as was the case with the infamous tax cuts in the UK. The prime minister finally threw her Chancellor of the Exchequer under a bus. We are unlikely to get such a U-turn in the markets after the ugly October inflation Nowcast. BTC is seeing realized volatility at two-year lows which in the past has preceded large moves. We also look at ATH hash rate, peering under the hood at the reasons behind it and the implications for miners and the market. Finally, it is a boom year for hackers on DeFi bridges, according to the latest data. 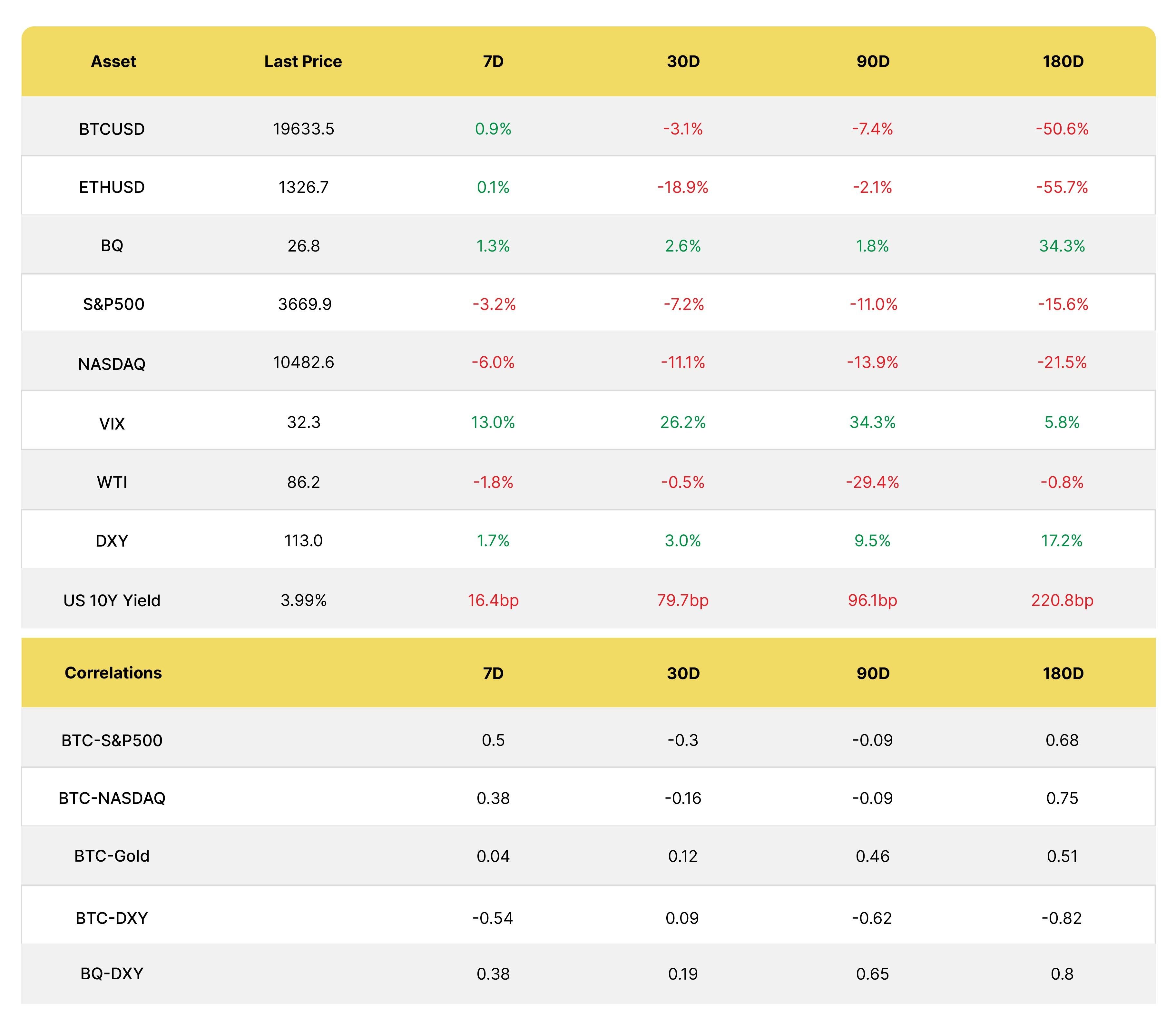 BUY THE RUMOR, SELL THE FACT

September US CPI printed at 8.2% YoY with core inflation rising to 6.6% YoY, even higher than the Nowcast was projecting. Sequentially, core inflation is high at 0.5% mom and higher next month. That leaves 75 bps on the table for November, fully priced in, and another 75 bps as a Christmas bonus in December (66% probability).

The markets had largely priced in the bad numbers ahead of the data as both the Nasdaq and S&P broke through the June lows and the ten-year kissed 4.06%.

While the stock market was rallying, data for October inflation showed no let up

CRYPTO WOES A TEASER FOR THE MAIN SHOW

Turns out Terra/Luna and crypto CeFi platform blow-ups were just a taster for the main course.  And as the creator of the MOVE index, Harley Wassman, pointed out recently, when volatility rises, investors stop taking risks and liquidity evaporates, creating a vicious cycle. By comparison, the equity sell-off so far has been smooth with Thursday’s last-minute rally leaving many scratching their heads.

“You’ve got three days left now. You’ve got to get this done,” Andrew Bailey, governor of the Bank of England warned UK pension funds that the BOE would not backstop bond purchases past October 14 as they scrambled to raise cash for margin calls.

The pension schemes pleaded for an extension and finally got relief when it became clear Truss was due for a U-turn on tax cuts, which had triggered the crisis, to begin with. The disadvantage of CeFi, lack of transparency, once again became apparent, as we were in the dark on the size of the pension fund hole.

According to Kempen Capital Management, pension schemes need to post 160 billion pounds of cash as collateral for every potential 100 basis point move in yield, hence the selloff in gilts. The UK 30-year gilt has similar performance to BTC year to date.

Trussonomics: Gilts as a risk asset

Investors jumped over to the continent, whiffing out issues there after the German government announced $200bn in energy price subsidies and possible EU debt support to tackle the crisis. German 10-year bunds are at levels not seen since 2011, having been negative as recently as January.

German bunds also spiked on contagion from the UK

Cathie Wood of Ark Invest also pleaded with the Fed in an open letter asking them to back down or risk a deflationary bust (despite the performance, her ETFs have had $1.2 bn in inflows YTD). Nasdaq positioning finally turned sour, after tech led the summer rally, which we hadn’t witnessed since last March.

As real 10-year yields rise, gold gets pummeled because they are usually negatively correlated given the precious metal has no yield. Other factors also feed into the gold price such as geopolitics and supply and demand but the yield is the predominant one. As inflation rises, gold performs well as people seek to preserve their wealth but once rate hikes commence and real rates turn positive, this strengthens the dollar and alternative assets become more interesting options to gold. 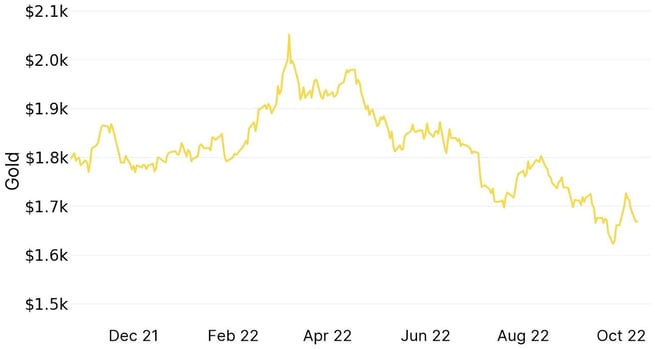 Rising real rates are not good for gold (or bitcoin?)

Annualized 30-day volatility for BTC remains low, despite spikes in the bond market and a VIX above 30 in equities, while open interest in BTC terms remains elevated as is the case for ETH.

UNISWAP GETS A REFRESH

Uniswap Labs, the company behind the decentralized exchange Uniswap, secured $165 million in a Series B round led by Polychain Capital, taking the valuation to $1.66bn. This comes as Uniswap unveiled a new user interface with more token data, discovery, and search options so traders can swap more easily. They no longer need to hop between different sources and websites.

Uniswap, the fourth leading project by fees last week, got a refresh in interface and funding

The Uniswap deal was good news in a muted VC market. Techcrunch recently reported valuations are down 70-80% and funding cut by half, with seed deals at $10-$40mn valuations from $50 mn-$100mn.

Software used in bitcoin mining just got its first upgrade since 2012, and some companies including payments giant Block (formerly Square) want it to become an industry standard as it requires lower-quality internet connections and improved security. This would allow mining to become more decentralized just when the industry seems to be consolidating.

Counterintuitively, the mining hash rate is hitting new highs as rig prices have come down and are more efficient, well-capitalized players are receiving equipment ordered for expansion plans plotted during the bull market, and Ethereum miners may have migrated to the Bitcoin system.

Glassnode gave a great analogy, this is equivalent to all 7.753 bn people on Earth each completing a SHA-256 hash calculation 30 bn times per second.

Given price action, revenue earned per Exahash has been in a long-term downtrend, with the BTC-denominated reward at an all-time low of 4.06 BTC per EH per day, back to two years ago, when BTC was at half today’s price. A BTC price of $17k-18k is seen in several studies, including the Difficulty Regression model, as a system-wide cost of production, with miners possessing 78k BTC that could be sold in a capitulation scenario.

According to Glassnode data, miner distribution has slowed down by half to 4.5k btc per month as pressure in September appears to have been driven by large troubled Chinese mining pool, Poolin.

Smaller, less capitalized miners are being squeezed by lower revenues and higher energy costs. Binance has launched a $500 million fund to provide collateralized loans to miners for 18-24 months at 5%-10% rates, following similar initiatives by Bitmain and Maple Finance.

London-based Argo Blockchain is one miner that has been struggling for months, its shares pungling from $148 to $14 since the peak last November, ARB fell more than 50% just this month after the company announced an update with lower mined BTC as network difficulty increase by 12% in September.

Argo will shore up its balance sheet by issuing stock at a discount to an unnamed investor for $27 mn to ease liquidity issues as well as sell 3.4k mining rigs. This is a company that grew its revenue by fourfold in 2021 and had ambitious expansion plans for 2022.

Small London-based miner, Argo, had to get emergency financing but poses no systemic risk

Argo gets emergency funding: Cash is no longer trash in a bear market

A BULL MARKET FOR HACKERS

According to Chainalysis, October is now the biggest month in the biggest year ever for hacking activity, with the month not over yet. $718 million has been stolen from #DeFi protocols across 11 different hacks, without even considering the Mango event, which was technically not a hack but a case of pumping up the token price in a low liquidity market.

A MARRIAGE OF CONVENIENCE: COINBASE + GOOGLE PARTNER UP

This week we found out that Google will start letting some crypto and Web3 customers pay for cloud services with crypto in 2023 via Coinbase Commerce, something the competition does not offer. Coinbase for its part will use Google’s cloud infrastructure and move away from Amazon. Google has been growing this business line as it tries to diversify from advertising, and it now accounts for 9% of revenue (16% for Amazon).

Coinbase is also on a diversification journey as it seeks to survive the crypto winter and stem high cash burn. The exchange will receive a percentage of payments, having won out over competitors such as Paypal. Google is also exploring the use of Coinbase Prime.

There is irony in having third-parties charging a layer of fees to help corporations pay with crypto as well as custody it, but the convenience and security will surely appeal to some. Coinbase popped 8% on the day of the announcement on a short squeeze as short interest as a percentage of free float remains very high at almost 20%.

Next week we are excited to be attending DAS London, a fantastic conference that brings together the digital asset community. I will be participating on Bloomberg’s panel “Bridging the Gap Between Speculation and Fundamental Value in Digital Assets”.  Hope to see you there! 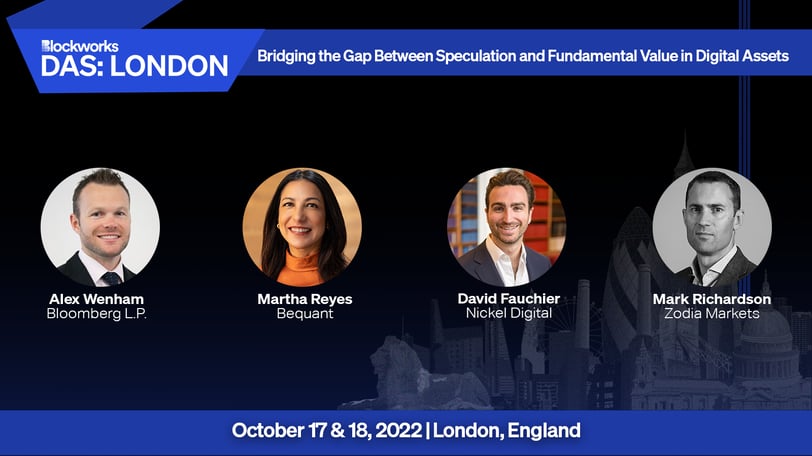