Mrs. Watanabe and the carry trade 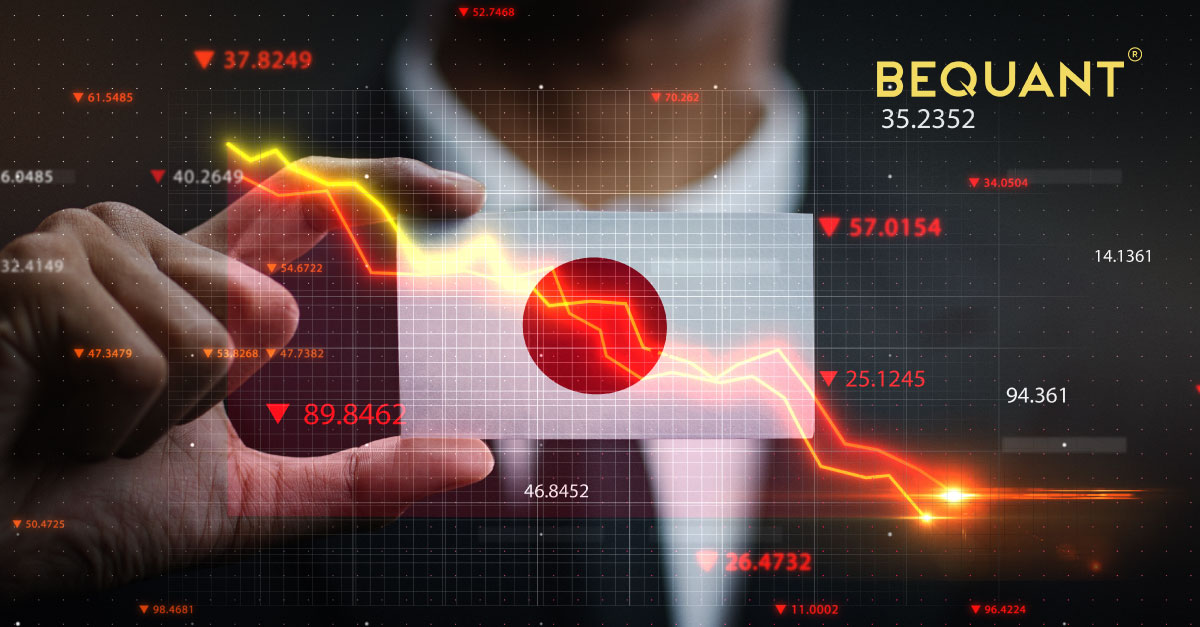 In the early 2000’s we used to discuss a character called Mrs. Watanabe, a fictional Japanese housewife who embodied the millions of Japanese savers piling into exotic instruments in the search for yields they could not get at home. As the gulf between U.S. Treasuries and the ROW widens, she has made a reappearance, leading to massive yen weakness.

In digital assets, capital is rotating to more attractive yields in DeFi, as simply holding the USD index this year has yielded a 7.5% return, granted still below inflation. Even Sam Bankman-Fried of FTX is harping on about the profits in staking. Yet another algorithmic stablecoin launched and Fireblocks experienced strong demand for access to Terra from institutional customers. Perhaps Mrs. Watanabe is already there.

SHARP REVERSAL IN US GROWTH, LET’S HOPE THE FED IS PAYING ATTENTION

U.S. gross domestic product fell by 1.4% year over year in the first quarter due to supply disruptions, though consumer (+2.7%) and business spending (+9.2%) were still solid. The decline was a sharp pivot from a 6.9% annual growth rate in the fourth quarter and highlights the perils of too much tightening.

The trade deficit widened as Americans imported more goods and services and a strong dollar made exports less competitive, while inventory buildup receded.

Earnings so far in Q1 are flattish at around +1%, with the Nasdaq Best P/E at 23.8x P/E, back to 2020 levels but there is risk to the downside for earnings as evidenced by Amazon’s first quarterly loss in seven years on rising costs and Apple’s revenue warning for Q2 due to the China lockdown.

One of the best trades so far this year has been shorting the Japanese yen versus the dollar as Mrs. Watanabe makes a reappearance. This Japanese housewife is fictional but in the early 2000’s we were all trying to figure out her next move. We followed her to Brazil and other risky pockets, as she represented the army of Japanese savers flocking to high yield markets in the face of zero rates at home. This time she will be adding digital assets to her portfolio.

With the Bank of Japan sticking to yield curve control, with no upper band limit, the yen broke through the 130 level against the greenback for the first time since 2012 as the bank said it would purchase 10-year Japanese government bonds daily at a yield of 0.25%, creating an ever widening spread with the rest of the world.

The Japanese central bank is grappling with rising prices, a weak yen and a sluggish economy expected to grow 3% this year. Though Japan's consumer prices rose by 1.2% yoy in March 2022, inflation is still muted and mostly cost-push for now. The central bank could view it as an opportunity to escape the deflationary trap and finally achieve their 2% target.

The yuan also continued its downtrend, reaching a one year low as lockdowns continued and the differential in rates with the U.S. widened, leading to tens of billions of dollars of foreign outflows.

China likely welcomes some currency weakness to boost its competitiveness in the face of a weak economy. During the pandemic, authorities had expressed discomfort with the strength of the yuan due to strong export performance. The pullback in the yuan could be good news for the U.S. too, given that it tends to correlate to import prices.

Co-dependent: The U.S. trade deficit reached record levels in 2021 despite the trade wars

Another small, troubled country adopts crypto. This time it was the Central African Republic, becoming the first African country, and the second after El Salvador, to adopt bitcoin as legal tender. BTC will be legal alongside the French-backed CFA franc.

The country is war torn and split along religious lines and is one of the world's poorest, despite having an abundance of diamonds, gold and uranium. They are also a Russian ally, having moved away from France in recent years, making for an interesting geopolitical situation.

71% of CAR’s 5.4 million inhabitants were living below the international poverty line in 2020, according to the World Bank and internet coverage is low, so most people won’t have access to using the peer-to-peer decentralized ledger. It is likely not a coincidence that the country’s president is a distinguished mathematician.

The New York State Assembly passed a bill that would place a two-year ban on all new proof-of-work (PoW) mining operations in the state that use carbon-based fuel. The bill would impose a two-year suspension on approval of any new Bitcoin mines and would also prevent the renewal of permits for miners seeking additional electricity.  The bill still needs to pass a Senate vote and afterward, Governor Kathy Hochul can still veto it.

A similar proposal called the Markets in Crypto Assets (MiCA) bill was narrowly defeated in the European Parliament last month. At the other end of the spectrum, the city of Fort Worth announced they will start mining and joined a pool, while hash rate continues to rise.

BEQUANT, the digital asset prime brokerage and exchange, is proud to announce the listing of its first music token, the JAM token from Tune.FM, on the BEQUANT Exchange.

The Tune.FM JAM Token is a Hedera Hashgraph-powered music token that enables a global decentralized music streaming marketplace platform for artists and fans. Each JAM token is paid almost instantly with minimal fees. This means the artist keeps around 90% of revenue made through each stream. This system of micropayments is creating a fully tokenized music economy, connecting artists and fans in ways not seen in the industry before.

WIth regard to BTC, as a representation of the overall ecosystem, the market is allocating capital into perpetual swap markets rather than calendar futures. The current open interest in perpetual swaps is 1.3% of the Bitcoin market cap, which is approaching historically high levels.

However, according to Glassnode, there is an even larger aggregate transfer of capital out of calendar futures, creating a net decline in overall leverage. This makes sense given that yields  have fallen back to around 3% which is not much more than the US 10 yr bond. This explains why capital is leaking into higher yielding alternatives.

Fidelity made a splash this week by announcing it will allow individuals to earmark a portion of their retirement savings to bitcoin through their 401(k) plans even as the Department of Labor recommended extreme care for fiduciaries considering crypto. Overseeing a third of the total in 401(k) plans at $2.7 trillion under management and allowing for a maximum allocation of 20%, these are significant sums.

The firm has been at the forefront of digital asset adoption, having launched a dedicated unit in 2014 and an institutional platform in 2018 as well as ETF’s. Now they are launching a financial education experience in the metaverse to appeal to young people as a survey by T. Rowe Price found younger demographics are more knowledgeable and positive on crypto.

GO BIG OR GO HOME: HEDGE FUND SKYBRIDGE TO GO ALL INTO CRYPTO

Anthony Scaramucci is so bullish that SkyBridge Capital is looking to move most of its $7.3 bn in assets under management to digital assets, The hedge fund was started by Scaramucci in 2005 and got into bitcoin in late 2020. Skybridge now manages a $7 million Bitcoin Fund among and has been lobbying to get a spot BTC exchange-traded fund (ETF) approved by the U.S. Securities and Exchange Commission (SEC). They have decided to move away from credit managers, which seems timely given a lower growth and higher debt outlook, and invest in bitcoin and ethereum.

INSTITUTIONAL STAMPEDE INTO TERRA VIA FIREBLOCKS

Despite the recent de-pegging of another stablecoin, Waves’ Neutrino, in April, demand  remains relentless. The CEO of FTX recently calculated that profit purely from staking probably figures in the “high single digit billions of dollars”.

This comes even as access to Terra, built on the Cosmos blockchain is fully permissionless and is not part of the custody firm’s know-your-customer (KYC) pooling system.

COPYCAT: YET ANOTHER  ALGORITHMIC STABLECOIN

The USN stablecoin can be minted by depositing NEAR tokens,  the native coin of the Near blockchain, as collateral. Decentral Bank, a DAO, is leading the effort and the stablecoin will pay 10% annual yield derived from 11% returns on staking Near. The yield will depend on how much NEAR is staked and the peg will also be backed by a yet-to-be revealed reserve, much like with TERRA.

CRYPTO MAKES IT INTO THE  IVY LEAGUE: DRAGONFLY’S $650MN FUND

University endowment funds, with over $800 bn in AUM, have been expanding into alternative investments for years very successfully, with 30% of their assets in that category, achieving attractive returns with moderate risk. Harvard and Yale have had the best returns, eschewing the traditional 60/40 portfolio and contributions have been at record levels, with 2021 seeing stellar returns (+30%).

OpenSea announced it had acquired NFT marketplace aggregator Gem for an undisclosed price, to cater to more professional users and as GEM volumes have been rising rapidly. Gem lets traders buy NFTs across various collections and multiple marketplaces in a single transaction that saves on gas fees. For now, OpenSea is adding popular Gem features such as its collection floor price sweeping tool, and rarity-based rankings to its platform.

BAYC: SEE YOU ON THE OTHERSIDE

Despite the phishing attack on the official BAYC Insta account and Discord server which saw over 50 apes compromised, the related ApeCoin token was up 46% to $21 ahead of the metaverse launch, Otherside, on April 30th. Otherside opens up new ways for BAYC NFT holders and APE holders to gain utility from the metaverse token, including the purchase of virtual land. It is this ability to create use cases which is instrumental to sustaining the value of the coin.

This document contains information that is confidential and proprietary to Bequant Holding Limited and its affiliates and subsidiaries (the “BEQUANT Group”) and is provided in confidence to the named recipients. The information provided does not constitute investment advice, financial advice, trading advice nor any other sort of advice. None of the information on this document constitutes, or should be relied on as, a suggestion, offer, or other solicitation to engage in, or refrain from engaging in, any purchase, sale, or any other any investment-related activity with respect to any transaction. Cryptocurrency investments are volatile and high risk in nature. Trading cryptocurrencies carries a high level of risk, and may not be suitable for all investors. No part of it may be used, circulated, quoted, or reproduced for distribution beyond the intended recipients and the agencies they represent. If you are not the intended recipient of this document, you are hereby notified that the use, circulation, quoting, or reproducing of this document is strictly prohibited and may be unlawful. This document is being made available for information purposes and shall not form the basis of any contract with the BEQUANT Group. Any transaction is subject to contract and a contract will not exist until formal documentation has been signed and considered passed. Whilst the BEQUANT Group has taken all reasonable care to ensure that all statements of fact or opinions contained herein are true and accurate in all material respects, the BEQUANT Group