Be careful what you wish for. This time last week we were bemoaning the multiyear low volatility in bitcoin, concerned which way the suppressed volatility would play out, expecting the trigger to be weakness in traditional markets. We now have an answer and it wasn’t the decoupling some envisioned. A sad week for the sector and there will surely be more collateral damage. SBF’s “poor judgment”  will reverberate for months. Regulators have spoken out, exchanges are pushing for proof of reserves and VC’s are writing off investments. 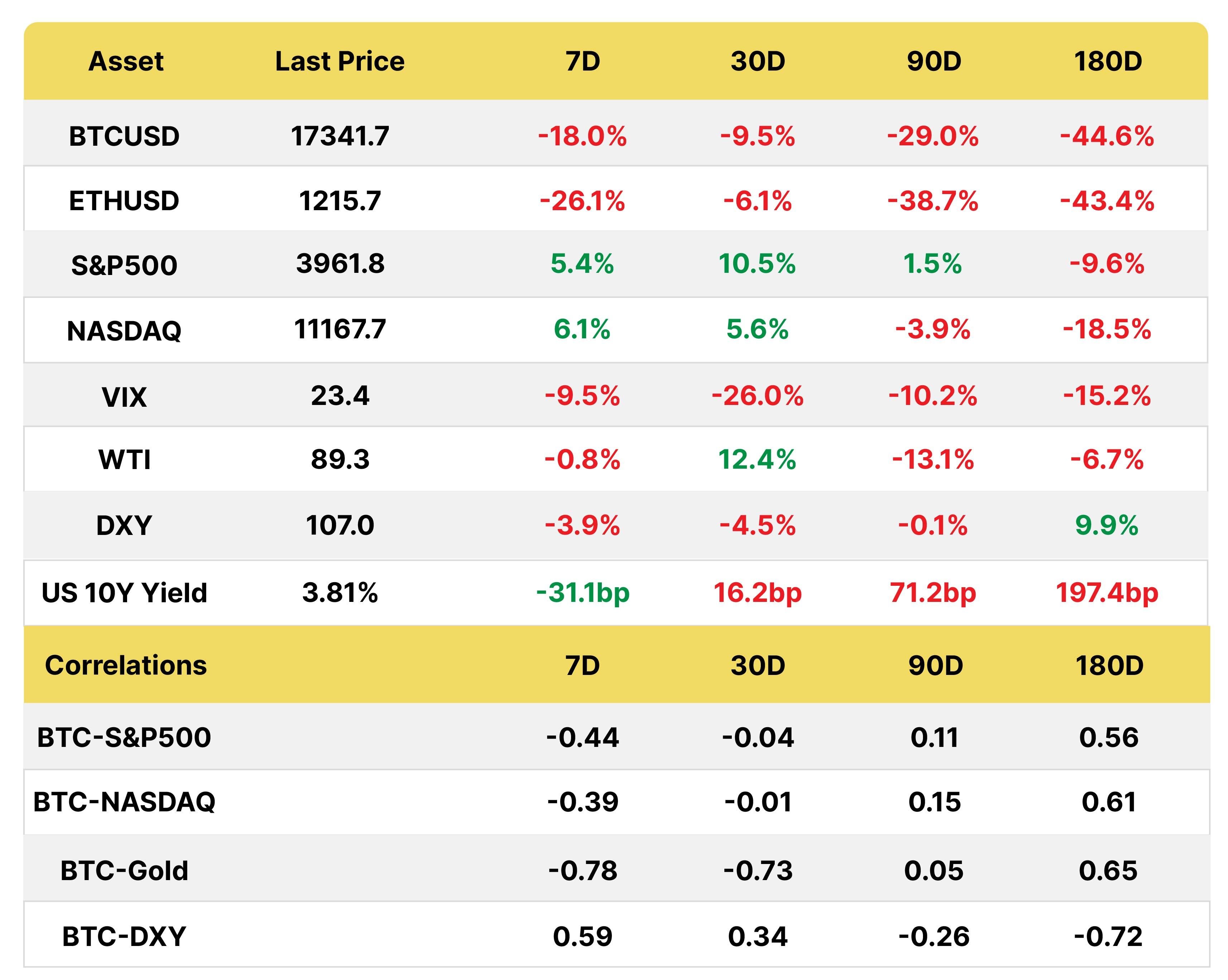 Ex-food and energy, most items decelerated month over month, except shelter (+0.75%) which continues to cause pressure due to lag effects.

Equities and bonds both rallied hard on the news with Fed officials coming out soon afterwards to tone down expectations and the Fed whisperer at the WSJ saying this did not change the path to a 50 bps increase in December. Goldman Sachs's most shorted basket of stocks rose 9.5%, with the Nasdaq down 29% YTD, while crypto got a break from a rough few days.

Crypto-related equities fell,  including Microstrategy (MSTR), Coinbase (COIN), Marathon (MARA), Silvergate (SI) and even Robin Hood (RH) due to FTX’s 7.5% stake in the company. As bitcoin falls, MSTR has had to top up BTC collateral on its $205 mn loan from Silvergate backed by 18k BTC, but the collateral has to stay at $410mn. In addition to bonds and convertible notes, Microstrategy posted $820M of BTC last March ( then at 45k) for $205m USD of cash to buy more BTC. His liquidation level is much lower, at $3.1k.

Crypto-related equities also struggled, with MSTR at the head of the pack

TOO BIG TO BAILOUT?

Almost $10 bn at last count according to Reuters. That is the amount FTX CEO Sam Bankman-Fried (SBF) told investors he needed to stem the liquidity crisis he created through the apparent use of FTX clients’ deposits as an Alameda piggy bank to implement trading strategies. That puts even Credit Suisse to shame, but without the government backstop. The companies were more intertwined than anyone suspected. And because it is crypto, depositors on FTX are unsecured creditors. There will be no FDIC.

The exchange saw upwards of $5 billion in withdrawals in the 72 hours before things reached a head on the morning of November 8, according to internal messages seen by Reuters. It begs the question as to why the hole is so large if as per SBF on since-deleted tweets on Monday, “FTX has enough to cover all client holdings.”

“We don’t invest clients’ assets, even in Treasuries.” in one tweet, in another “Assets are fine”. The terms of service point out as much “None of the Digital Assets in your Account are the property of, or shall or may be loaned to, FTX Trading; FTX Trading does not represent or treat Digital Assets in User’s Accounts as belonging to FTX Trading.”

Yet a WSJ source claims that of the $16bn in client deposits, half was lent out to Alameda, which pursues high risk crypto trading strategies.

The SEC and Department of Justice announced an investigation freezing $46 mn of USDT held in an FTX wallet on the Tron blockchain. Though one Minnesota congressman is arguing that Gary Gensler was too close to SBF, perhaps helping him to obtain a regulatory monopoly. On Thursday, the Bahamas authorities froze the assets of FTX Digital Assets.

How did it come to this? Just a few months ago, FTX was talking about raising another $1bn at the previous $32 bn valuation. The sector is still absorbing the sudden impact and potential implications, from liquidity to counterparty risk, regulation and investment write-offs, in addition to the loss of savings.

FROM $16BN NET WORTH TO ZERO IN TEN STEPS

1. Some context. Binance was an early investor in FTX, the 3rd largest exchange, but divested in Aug 2021. FTX bought out the Binance stake for $2.1 bn in FTT tokens and USD.

FTX was created after SBF decided to pivot from Alameda Research, which was born out of arbitrage trading but shifted to market making. Last year, Alameda generated a profit of $1bn, while FTX generated $321mn. The FTX token, FTT, grants trading fee discounts/additional features and burns tokens depending on trading fees generated.

The exchange seemingly came from nowhere at the end of 2020, aided by massive publicity efforts, and was around 10% of the dominant futures market and 5% of spot, dwarfed by Binance.

2. Over the last few months, an increasingly tense relationship between CZ and SBF has played out on social media. The high-profile FTX founder cozied up to US regulators, donating $50mn for the midterms. Crucially, he was influencing a draft crypto bill (the Digital Consumer Protection Act) which incurred the wrath of many who believe he was tipping the balance in favor of his exchange.


3. There has been ongoing unease about the relationship between FTX and its sister company, Alameda.  Despite their protestations, Alameda, a leading player in the space whose liquidity was instrumental to FTX in the early days, could have received special treatment as a market maker on FTX.

The recent merger of Alameda VC into FTX and the resignation of head of trading, Sam Trabucco, followed by the head of FTX US, Brett Harrison, added to suspicions. Whenever someone leaves suddenly for “personal reasons” = 🚩 🚩.

4. The grenade was hurled by Coindesk last week when it leaked part of Alameda’s balance sheet and the details were alarming.  $14.6 bn in assets, $8bn in liabilities and most of the assets in illiquid tokens with no clarity on the denomination of the liabilities. A mismatch of assets and liabilities and no attention to the importance that liquidity plays in the survival of a business.Alameda’ s CEO was quick to clarify there was an additional $10bn in assets though there was no evidence forthcoming. The assets were mainly their own token and other highly illiquid, low float tokens that have plummeted in value, including over $2 bn in FTT collateral, which raised eyebrows.

Who was the creditor who had financed Alameda using exchange tokens as collateral, was it FTX itself and, even worse, was it user deposits???  > 40% of Alameda’s assets were in their own exchange token, which has low float, with 1% of addresses owning 99% of the tokens. Moreover, what they declared as FTT assets ($5.9bn) was higher than the market cap of the token so selling it would be impossible.

5. On Sunday, CZ, CEO of Binance, confirmed that they were dumping their FTT bags. “Learning from Luna”, they were risk managing after the Coindesk leak and selling their FTT holdings, of which this was a part of.

6. The CEO of Alameda publicly offered to buy Binance’s entire holding OTC at $22. Why $22? Traders concluded that below that, there would be a margin call and hence why the token hadn’t fallen below that level for months. Everyone rushed to short the native FTT currency, with open interest ballooning soaring, forcing Alameda to defend the line they drew for themselves.


Rookie error: Alameda showed its hand by making a $22 offer on Binance’s bags of FTT

Traders scrambled to short FTT, forcing Alameda to burn through cash, with $2.5bn in market cap wiped out, adding to balance sheet distress

7. Crisis mode kicked in, with SBF stating that FTX had $1 bn in excess reserves. If this was the case, why was Alameda transferring stablecoins by the hundreds of millions to FTX as tracked on chain? Alarm bells set off and the rush for the door from the exchange took off.

8. At this point, SBF was fighting a war on two fronts, propping up FTT while trying to meet the mounting redemptions from the exchange. He went quiet for hours and overnight on Monday, the $22 peg broke.

9. By Tuesday morning, FTX had halted withdrawals and soon after announced a non-binding acquisition by Binance giving the market some relief. However, indications were that the hole was too big, even for Binance and the selloff in crypto assets and equities resumed.

10. Binance confirmed what the market suspected. They would step away after looking at the books. By mid-week, BTC fell below 16k, a level not seen for two years where only those who bought in 2017 or earlier were in profit. USDT temporarily losing its peg, before a soft-CPI led rebound on Thursday. Other names popped up as potential saviors such as Tron and Temasek as SBF made the rounds to seek a bail-out up until the very last minute.

SBF apologizes for his “poor judgment” on Twitter admitting that leverage at FTX was 1.7x and not zero, blaming a mislabelling of bank accounts.

FTX BTC and ETH reserves were depleted and stablecoins eliminated, as per Glassnode, with BTC reserves falling since Luna

Along with FTT, Solana (SOL) bore the brunt of the sell-off given the sizable Alameda holdings and backing by FTX and Alameda of the Layer 1 outage-prone blockchain. Solana Labs confirmed they had no holdings on the exchange. Some treasuries may not be so fortunate.

However, a Solana unlock was looming: approx 15% of supply was being unstaked by validators, at 55 mn SOL when the current epoch ended on Thursday, approximately every two days as people decided to exit. The average APY of 6% for driving the network did not compensate for the plunge in price over the last few days plus the time, expensive validators and network requirements.

Solana tokenomics: Total supply 533 mn of which 362mn are circulating, although there is no supply cap, Instead there is an inflation rate. The initial inflation rate is reduced 15% yearly until it reaches what Solana calls a long-term inflation rate of 1.5%. This means the supply will increase over time —by 2030, Solana’s max supply should be over 700 million SOL tokens. However, Solana burns a portion of transaction fees, currently 50%, to keep the supply balanced.

Solana: over $7bn in market cap lost, will the vibrant SOL community survive?

WHO ELSE IS EXPOSED?

As events unfolded, questions emerged about Alameda’s investments, DeFi positions and token holdings as well as who had exposure to the exchange. Galaxy Digital confirmed a $77 mn hit, Genesis has recognized $175 mn locked on FTX, while Sequoia has written off their $200mn investment and BlockFi, given a credit line by FTX to stay afloat, has suspended withdrawals.

Sequoia has already informed its investors that it has marked its $200 mn investment to 0 but that they were small in the scheme of things (between 1%-3% of their respective funds).

FTX funding rounds and investors who may get wiped out